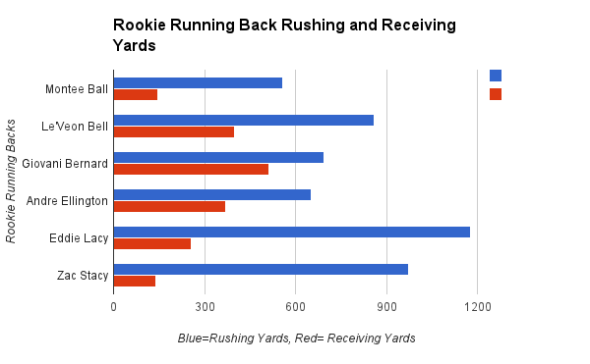 The big three draft options we heard before the start of the 2013 season for rookie running backs were Montee Ball, Le’Veon Bell, and Eddie Lacy. Those who stuck with Lacy and Bell through their injuries were rewarded with Lacy finishing 6th in scoring among running backs for standard scoring leagues, and Bell finished the year tied with Alfred Morris at 14th. Montee Ball ended up ranking 42nd in fantasy points for running backs, but with an average draft position of 64.6, most fantasy owners drafted Ball in the beginning of the 5th round. You could have picked up Le’Veon Bell at the end of the 8th round or start of the 9th, but you can’t predict the future(if you can please email me).

While these were the names most owners were primarily focused with at the start of their draft, several rookie running backs made a fantasy impact this year. Eddie Lacy had the most rushing yards, rushing touchdowns, and rushing yards per game among his rookie peers, but Giovani Bernard lead the NFL running back freshman in receiving yards, receiving touchdowns, and receiving yards per game. Surprisingly, the leader of yards per carry and yards per catch in this group was the same person, Andre Ellington. Giovani Bernard and Le’Veon Bell look to be two of the more complete backs in terms of their rushing and pass catching ability, but Eddie Lacy and Zac Stacy clearly stood out for their rushing yards. Obviously each back will have their strengths and weaknesses, but with the top three scoring fantasy running backs of Jamaal Charles, LeSean McCoy, and Matt Forte being heavily involved in the passing game, you may want to keep Gio Bernard, Le’Veon Bell, and Andre Ellington in mind for the 2014 season.