Jon Sousa was lucky enough to attend the Jets vs Panthers game this weekend, and reviews the fantasy performances of the players with his first hand account!

This past weekend, I was able to do something that I’ve always wanted to do, but was never able to. I’ve been a football fan since I was ten years old and football has always been a huge part of my life, but I never had been to an NFL game. I attended school at UNC Charlotte, and my girlfriend and I along with another couple decided to attend Sunday’s game featuring my two favorite NFL teams, the Panthers and the Jets. Living in North Carolina, being a Panthers fan is a given. I’ve loved the team since Jake Delhomme and Mushin Muhammad were wearing black and blue all the way back in 2004 (I’m still bitter about that Super Bowl loss to the Patriots), but my Jets fandom is a result of relatives that lived in that area for a long time. It was a great experience, and I got to see some pretty good football and some bad football too. Let’s take a look at the fantasy output from both teams.

For the Panthers, DeAngelo Williams shined, putting up an impressive stat line with 15 carries for 81 yards. He also was huge in the passing game, gaining 87 yards on 3 receptions with a 72-yard score off a screen pass in the second quarter (all of Williams’ receiving yards came off of screen passes). DeAngelo ran tough against a stout Jets run defense, and should be a nice play for owners in the playoffs. Cam Newton was 27 yards away from a 300-yard passing game, throwing for 273 yards and the one touchdown to Williams. The Jets did a decent job holding Newton in check on the ground, resulting in only seven carries for 12 yards. Newton looked sharp with his decision making, rarely making errant throws and keeping a poor Jets secondary on its’ heels all day. Greg Olsen (5 catches on 8 targets for 88 yards) and Brandon LaFell (3 reception on 4 targets for 61 yards) looked good in the passing game, while Steve Smith (3 reception on 5 targets for 20 yards) was held in check by Antonio Cromartie, the Jets top cover cornerback. The Panthers D/ST had a great game as well, racking up 16 points in a performance that was highlighted by a 41-yard INT return for a touchdown by corner back Captain Munnerlyn.

For the Jets, there weren’t too many positive. Geno Smith did a decent job keeping the Jets in the game during the first half, although his pick six all but sealed the Jets fate in the second half. He saved owners that may have started him late in the fourth quarter with a touchdown to Jeff Cumberland (3 receptions on 4 targets for 50 yards and a touchdown). Smith finished with 167 yards passing with a touchdown and an interception, while also adding 47 yards rushing on six carries. Bilal Powell and Chris Ivory (four and six points respectively) both a goal line touchdown vultured by defensive lineman Sheldon Richardson, which hurt both of their stat lines. David Nelson led the way for the Jets receivers, finishing with 3 receptions on 4 targets for 44 yards. Santonio Holmes had a dismal fantasy day, finishing with only 2 receptions on 8 targets for 22 yards. Holmes and Smith also miscued on a goal line throw that would have saved Holmes’s fantasy day.

Overall, it was a great experience for me. Seeing my two favorite teams play in my first NFL game ever was awesome. Below is a picture of my girlfriend and myself after them game (you can see what team we were supporting that day). 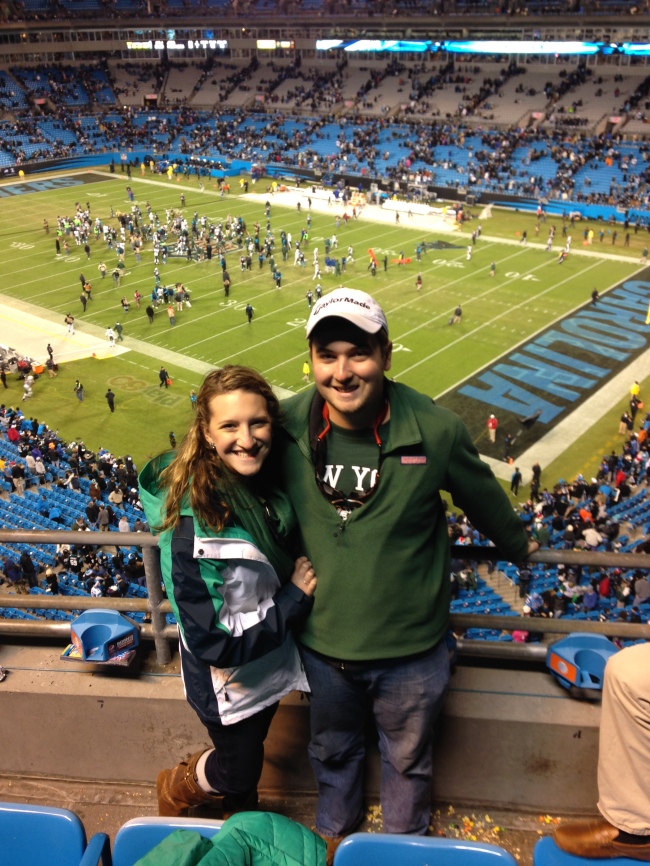