Even though I only doubled my $10 entry fee into the FanDuel Fantasy Football Championship qualifier, I was still able to create a higher-scoring line up than 17,559 other players.

For anyone new who wants to take a shot at the $2 million grand prize for this tournament, or if you want to just check out a few smaller tournaments or head to head games to get your feet wet, you can sign up using my recruiting code. Feel free to share any large winnings.

When you start off building your roster, you are given a $60,000 budget to “buy” a quarterback, two running backs, three wide receivers, a tight end, a defense and a kicker.

My picks are listed below: 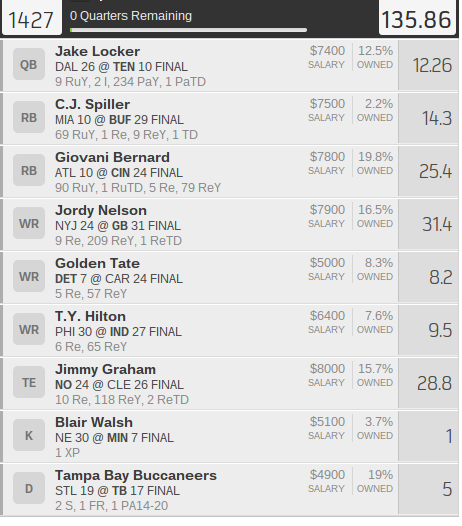 For tournaments, you need to hit with a few picks that aren’t considered main stream or popular.

For my quarterback position, I took a chance on Jake Locker because of his cheaper price tag and opponent, but things didn’t pan out in Week 2. Locker had a solid outing in his first week, totaling 266 passing yards and two touchdown passes. Facing the defense for the Dallas Cowboys, I felt the 26-year old quarterback had enough weapons around him to have a very strong fantasy outing. Sadly, we saw the inconsistent Locker on Sunday, and my investment did not pan out.

I can’t stress enough how important it is to understand the scoring system for any fantasy football format you play in, and I wanted to capitalize on cheaper pass-catching backs for this one point per reception tournament. C.J. Spiller has a history of destroying the Miami Dolphins’ defense, and he was moderately successful, albeit, not in the way I envisioned. Giovani Bernard faced a strong defense in the Baltimore Ravens in Week 1, so I wasn’t worried about his abilities moving forward. With several key injuries, the Cincinnati Bengals will continue to find ways to get Bernard involved in the offense, and finishing the day with 90 rushing yards, one rushing touchdown and 79 receiving yards, is only a slither of what is to come from Bernard this year.

One of the biggest obstacles new daily players will face is trying to understand that a players’ circumstances will change from week to week. Sure, Jordy Nelson had a mediocre game against the Seattle Seahawks to start the season, but his fantasy value as a whole isn’t going to be determined by just that game. With the rushing attack a little questionable because of Eddie Lacy‘s concussion, I fully expected Aaron Rodgers to continually throw bombs down the field to shake off his Week 1 performance, and with a weaker secondary, I knew Nelson would get by for a big gain or two. Nelson fulfilled my prediction, as he racked up fantasy points with an 80-yard touchdown catch, and finished the day with 209 receiving yards and one touchdown.

I looked towards Golden Tate to fill my next wide receiver slot. After watching Calvin Johnson shred the New York Giants‘ defense for 164 yards, I expected Megatron to be stifled by the much tougher defense of the Carolina Panthers. The Detroit Lions as a whole did not produce much offense, and fullback Jed Collins was the recipient of the lone touchdown for Detroit. The touches were there, the yards and touchdowns, however, were not.

The game plan for the Denver Broncos‘ defense was to take T.Y. Hilton out of the game in Week 1, and that was accomplished by Hilton’s performance of five catches for 41 receiving yards. While Trent Richardson and Ahmad Bradshaw were able to combine for 149 rushing yards Monday night, the Philadelphia Eagles‘ defense were able to disrupt Andrew Luck‘s accuracy and decision-making ability.

I had to pay for Jimmy Graham‘s $8,000 price tag, but he delivered big time. If you can construct the right line up around him, it makes sense to pay for this elite tight end week in and week out. In any game, he is always a candidate to receive multiple touchdowns, as well as a large amount of targets and catches. Just from receptions, the 27-year old tight end scored 10 points.

With the news of Adrian Peterson missing Week 2, I thought the Minnesota Vikings would struggle to find the end zone, and Blair Walsh would receive plenty of opportunities for long field goals. I was right about the Vikings struggling, but the defense for the New England Patriots absolutely smothered Matt Cassel, and the Vikings’ offense did not produce any fantasy value. With only one point, Walsh really hurt my team.

When you select defenses, you can either pay up, or play it a little cheaper and pray for turnovers. The Washington Redskins‘ defense had one of the cheapest price tags for FanDuel in Week 2, and I selected that unit in some of my other daily games I played. With a decent price tag and a seemingly great matchup against Austin Davis, however, I went with what I thought was a sure thing. Davis didn’t throw any touchdown passes, but he also didn’t record any interceptions on the day either. He was able to move the ball down the field, and Zac Stacy and kicker Greg Zuerlein took care of the scoring.

So, how will this information help me in the Week 3 qualifier, and more importantly, how will it help you?

When discussing strategies for tournaments with my buddy Jon Kelly of The Fantasy Football Crew, he told me that you want to pay for a solid quarterback. That doesn’t mean you have to add Peyton Manning or Aaron Rodgers to your roster every week, but you want to pay for a quarterback who provides his owners with consistency. Locker can be a fluky choice from week to week, and he didn’t provide me with the value I was hoping for. Next week, I am paying up for a quarterback.

For running backs, I am still looking for those dual-threat backs. I am not going to limit my view, however, as I will still look at Alfred Morris or Chris Ivory, as they can rack up a large amount of rushing touchdowns.

For my wide receivers, I am going to look for the main targets in the passing game. Luck has a ton of options and Matthew Stafford is loaded with weapons, so it is going to be difficult to predict when Tate or Hilton can provide fantasy production. Nelson is the main target in the passing attack, so I am going to focus on other receivers who will receive a large amount of targets and are the go-to-guys. That may sound overly simply, but understanding targets and usage is one of the most important aspects of fantasy football success.

I am going to look for a tight end who is actively involved in the passing attack, and if that means I have to pay dearly for him, I will. I will also look towards tight ends like Zach Ertz and Greg Olsen, as they are still under-priced options and offer a high upside for owners.

For kickers, I am going to look at the Vegas over/under lines, and focus on low-scoring games. I want to pick an offense that can move the ball, but might not necessarily have the running backs to punch it in.

Like I said for tournaments, you have to go gambling every now and then. There aren’t too many games to get crazy with in Week 3, but it appears starting any defense against the Jacksonville Jaguars’ offense, even if it means starting the Indianapolis Colts, can provide fantasy owners with the results they are looking for.

So there you have it. Targets, consistency and a little upside can take you a long way.