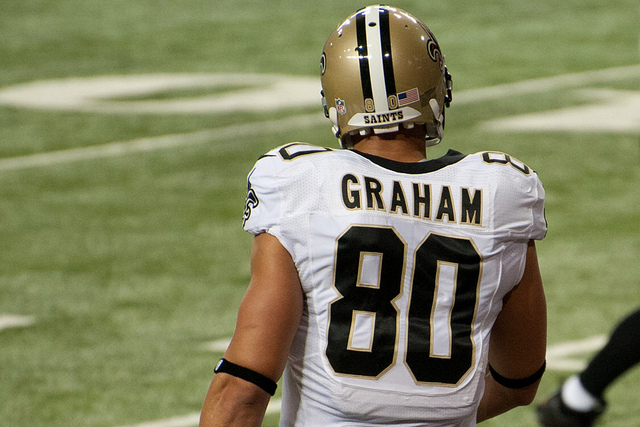 I feel like the same question always arises every week when someone is trying to pick a tight end for his or her daily fantasy squad: Do you go elite with someone like Jimmy Graham or Julius Thomas, or do you play it safe with someone cheaper like Greg Olsen or Jason Witten? I personally look to go elite at tight end in any 50/50 league that I’m playing in, but I have no problem putting a cheaper option in my GPP lineups. Here are my choices for tight ends for Week 3:

(Bet you thought I was going to forget to mention FanDuel, huh? Nah. Dollar amounts are courtesy of those fine folks, and if you wanted to get started over there, follow this link.)

Seriously, if you aren’t playing Graham this week, I really want to know why. Graham at home, where the Saints have scored an average of 17 more points than they do on the road in the past three years seems like a no brainer to me.  However, if you have the sixth sense to know when Graham is going to put up a dud game, more power to you. I just don’t see it this week. Likely, it’s going to be your other lineup choices decided whether you get into the money this week, but don’t be the guy kicking himself on Sunday night for not putting Graham in at least one lineup.

Get this; Greg Olsen is averaging at least 10 yards per catch this season. Pretty impressive, huh? The Steelers got torched last week by the Ravens’ tight ends, and I expect a similar outcome this Sunday night. Olsen had a pretty decent game against the Lions last week, catching six passes for 74 yards. His price tag makes him a safe play with a lot of upside this week. The Steelers are currently giving up an average of 12.5 fantasy points per game to opposing tight ends.

Kelce is a great punt play this week. His price tag allows you to spend at other positions, and he is coming off a respectable four catch, 81-yard performance against the Broncos last week. He is a vertical threat with a big frame, which makes him an ideal red zone target. I think that this game has the potential to be a shootout, or have the Chiefs playing from behind, so Kelce should get plenty of looks. The only problem comes in the form of fellow tight end Anthony Fasano, who still has the only touchdown by a Chiefs tight end this year.