Could running C.J. Anderson become one of the biggest busts in 2015 Fantasy Football leagues? If history and circumstances can teach us anything, than the answer is yes.

I’m not going to base any decision revolving around Anderson on a lone statement from Adam Gase. But, this does give me more fuel as viewing Anderson as a risky investment in Fantasy Football drafts.

Below, I will highlight my reasons for concern.

According to FantasyFootballCalculator.com, Anderson’s current ADP marks him as an early pick in Round 2. Over the past month, the 24-year old running back has maintained his position as either the third or fourth pick in Round 2 in standard scoring leagues.

When you draft Anderson that early, you need to look at the opportunity costs of players you will miss out on. For example, Calvin Johnson, Julio Jones and Jordy Nelson are all generally available with the fourth pick in Round 2. For me personally, I would much rather draft Johnson or Nelson over Anderson.

If you’ve seen my previous work, you’ll know I’m a fan of the Zero Running Back Strategy because it helps to maximize the value of your early-round picks by utilizing consistent players. The running back position by nature is very inconsistent, and you don’t want to build your team around risky investments. If you’re trying to scout out players who offer consistent results, Bob Lung of FantasyFootball Consistency and fellow So-Called Fantasy Experts, is the guy you want to seek out. Make sure to check out his Consistently Consistent series for running backs and wide receivers for the early parts of your draft, and you can also look for consistency answers on quarterbacks and tight ends.

With only one year of work to judge from, it’s hard to justify Anderson’s ADP.

A New Coach and Competition

New coach Gary Kubiak likes to run the ball, but most people are familiar with Arian Foster‘s numbers under Kubiak. Since he was only the offensive coordinator for one year in Baltimore, what did the rushing totals look like for Baltimore’s backs in 2014?

In terms of competition, Montee Ball may have been disappointing in the past two years, but he hasn’t completely disappeared. While disappointing, I don’t believe the Broncos are going to throw in the tall on their second-round pick in the 2013 NFL Draft. He isn’t scheduled to be a free agent until 2017, so I think the Broncos want to see what they can get out of him in the next few years. He isn’t feature back, but Ronnie Hillman proved his value last season as a change-of-pace back ,and contributed 573 yards and four total touchdowns to Denver’s offense in 2014.

Anderson could very well rush for over 1,000 yards with the right workload, but his touchdown production scares me with Kubiak.

Here is a breakdown of Pierce and Taliaferro’s rushing touchdowns from last season: 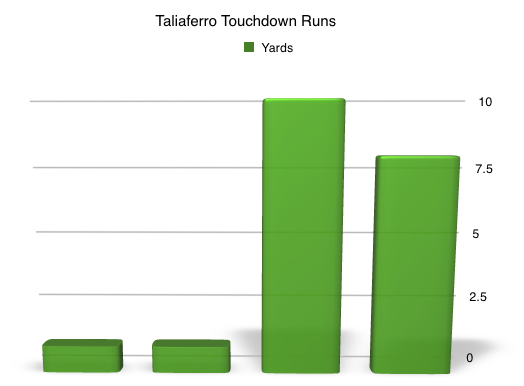 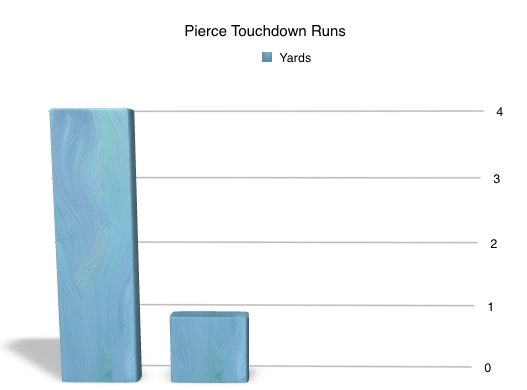 Touchdowns are sporadic as it is, so it’s obviously difficult to predict how and when a team will score. A total of three touchdowns from Taliaferro and Pierce, however, came from the 1-yard line. This is important to note because it means that Forsett was not used for three 1-yard touchdown plays. I would have to go back and review a play-by-play recap to determine if Forsett attempted the same plays and was stuffed, or he if wasn’t involved in the series at all, but I find that interesting to note.

The Truth Behind Anderson’s Conditioning

The story is worth noting, but how much did conditioning really change Anderson’s production? Here were his total touches from Week 12 to Week 17.

Anderson handled a very big workload, so I think the sense that he started to fall apart near the end of the season may not exactly be true. He may not have been in enough shape to handle 143 touches in five weeks, but just because he couldn’t sustain as large of workload as DeMarco Murray does not mean that he had a huge issue with conditioning. I know it’s his job to run the football, but any running back with that type of workload will eventually wear down and is a prime candidate for injury.

I think a far better indicator of how successful Anderson can be in 2015 Fantasy Football leagues is his blocking ability. Ball lost a major role in the offense in 2013 because reports stated he had issues with blocking, and protecting Peyton Manning is the most important job a player can have in Denver. Knowshon Moreno was able to prove that he could keep Manning from hitting the ground, and he overtook Ball as the starting running back. Pay special attention to any reports you see coming out of Denver that even mention the word blocking.

So when it comes to his conditioning, I’m not that worried. When you add in all the other factors, however, I think Anderson is too risky as a second-round pick. Again, I’m a much bigger fan of drafting wide receivers in the early rounds, and you can check out my ebook The Zero Running Back Strategy, which shows you how to limit your risk in your 2015 Fantasy Football draft.