I’m not sure what the reason is, but I always seem to do better in daily when I just play one lineup…

Statistically, you obviously have a much better chance to win the more lineups you have entered.

And that is one of the reasons I started playing on Fantasy Draft. In the contest I normally play, you are only allowed to enter a maximum of 20 lineups.

I’ve done that before, but I normally just break even or actually lose money.

I haven’t played any site in a while, so on a whim I decided to enter one lineup this week. 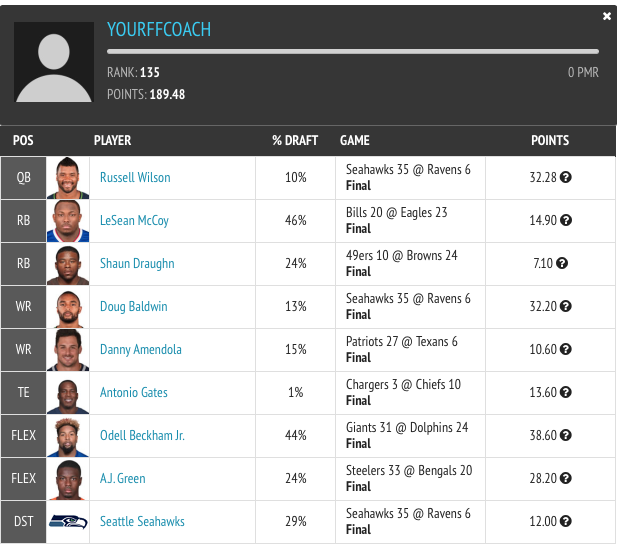 Thins would have gone a little differently if I had other players in instead of Danny Amendola and Shaun Draughn, but things could have also gone worse if I started Andy Dalton instead of Russell Wilson.

This roster was enough to win me money, which is what counts at the end of the day.

But I always look at my teams after I submit just one roster and think about what would have happened if I just tweaked it.

Maybe I’m in my own head too much, but I can’t seem to create a lineup like this and have enough tweaks to compensate for anything that goes wrong.

I either base several lineups off of what I think is my best one and that lineup is a bust, or I have one great lineup and the majority of my other lineups don’t cash and limit my winnings.

But it just seems like with one lineup, I’m always at least in the money. If I could somehow trick my brain into thinking I am only making one and go back later and submit 19 more, that would be awesome.

There has to be some psychology at work here. I would love to hear DFS players stories on how they feel starting just one lineup compared to multiple lineups.

I know the odds with multiple lineups are way more in your favor, but do you ever just set a certain lineup and feel way more confident about it than your others? Why do you think that is?

Anyways, here was my decision making process for my Fantasy Draft lineup, and hopefully there’s some piece of information in here that can help you set your Week 15 daily lineups.

With how poor the Ravens’ defense has been playing lately and how effective Wilson has been, I was really surprised to see that he was only owned on 10% of teams in this contest.

Logically, I wanted to stack Wilson with the receiver who was going to benefit the most from his quarterback’s production.

Doug Baldwin had caught five of those 11 touchdown passes Wilson had thrown before meeting the Ravens, so I thought he was the best option to stack with Wilson.

I lucked out that A.J. Green was still productive even when Dalton left the game, but my thought process thinking Dalton was the starter was that Green would be a solid play against a defense that had allowed 23 touchdown receptions on the year.

And there is no way I could sit Odell Beckham Jr. with the way he is playing. I don’t care if he is owned in 100% of tournaments. I was in 500th place before Beckham Jr. took the field, and look where I ended up.

The rest of the picks didn’t work out as well, but here was my thought process:

Danny Amendola- With Rob Gronkowski not being 100%, Amendola would be a PPR beast. Before Week 14, he was averaging 8.6 receptions per game in his last three games.

Antonio Gates– Philip Rivers is averaging over 40 passing attempts per game, and who else is he going to throw the ball to?

Shaun Draughn– I recommended him and Isaiah Crowell this week. I picked the wrong player. Each back faced a defense allowing a ton of rushing yards.

I always try to have a quarterback and wide receiver stack, and I focused this week on players with good matchups and who were building a strong rapport together.

I was able to get Beckham Jr. and Green in the lineup because I saved money on Draughn.

And that was it. It always sounds and seems so much simpler than it really is, but I found success through:

But whether you play one lineup or as many as you can, best of luck in Week 15. Unless you’re playing against me.