After an impressive 2014 campaign with the most passing yards of his career, quarterback Ben Roethlisberger found himself as a mid-round pick in 2015 Fantasy Football drafts.

He was also on pace to throw 28 touchdowns, which would have been a regression from his 32 in 2014.

So ahead of the 2016 Fantasy Football season, what can we expect from the 34-year old quarterback?

Last season, Big Ben recorded 300 or more passing yards in eight out of the 12 games he played. That means he threw for 300 or more yards in 66% of his performances.

Although his interception total (16) was high, Roethlisberger had a few huge games, and he was the second-highest scoring quarterback for the first two games of the seasons.

But he also had a few games that hurt his owners:

How the season unfolded for the Pittsburgh Steelers really made it difficult to really judge Roethlisberger’s season. He only had pass-catching specialist Le’Veon Bell in two of the games he played in last season, Martavis Bryant was only in the lineup for nine of Roethlisberger’s games, Big Ben sustained a concussion in Week 12, and players expected to step up like Markus Wheaton were largely ineffective.

Bell should be able to suit up in Week 1, but Bryant is serving a year-long ban, and veteran tight end Heath Miller is hanging up his cleats.

So what do Roethlisberger’s targets look like for the 2016 Fantasy Football season?

We don’t have to review Antonio Brown. Even in a non-PPR league, it’s hard to argue against him deserving to be the first player off of draft boards.

But the WR2 spot is where things get really interesting…

Wheaton is marked as an early favorite for the role, but I’m still not convinced he will make a significant contribution. If you look at Wheaton (5-foot-11, 182 pounds), he is built just like Brown (5-foot-10, 186 pounds).

So what the Steelers really need is a player like Sammie Coates (6-foot-1, 212 pounds) to take a leap in his second year in the league. And funny enough, he was actually compared to Martavis Bryant in his draft profile.

He’s currently a 12th-round pick on FantasyFootballCalculator.com, which means he won’t cost you anything to find out if he will become Roethlisberger’s second-favorite target.

Big Ben won’t have Miller this year, but he will have two interesting targets at the tight end position in Ladarius Green and Jesse James. Green wasn’t able to prove himself as indispensable when Antonio Gates was suspended last season, so he found his way to Pittsburgh.

Green did have the best year of his career in 2015, though, posting a 37-429-4 stat line, and he is a huge target at 6-foot-6, 240 pounds. But you can see here why I am skeptical about his Fantasy Football production.

The 22-year old tight end only caught eight passes last season, but one of them was a touchdown.

The one thing I want players to keep in mind (even though it’s so far away) is that Roethlisberger has a tough schedule during the Fantasy playoffs:

Roethlisberger has only posted average Fantasy stats against the Bengals and Ravens. 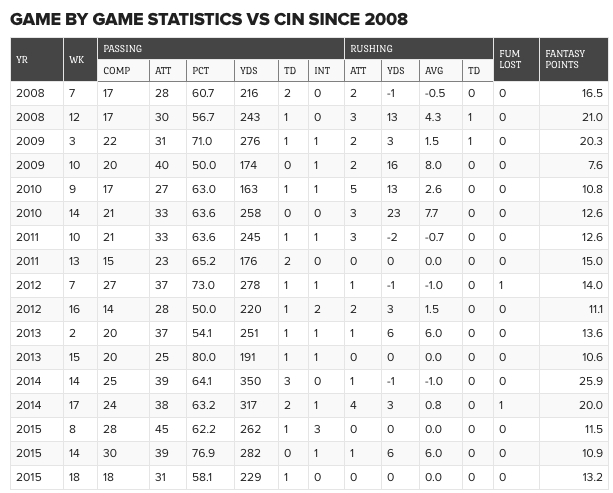 So if you do draft Roethlisberger, plan ahead for the playoffs!!!

My predication at the start of the season is that Roethlisberger may get off to a slow start. Green is currently sitting out of OTAs because of ankle surgery, which doesn’t give him a whole lot of time to build a rapport with his quarterback. And even though Miller wasn’t consistently Fantasy relevant throughout his career, he is going to lead a big void in the lineup.

Miller hauled in at least 51 receptions every season since 2011.

Coates will need to step up to replace Bryant, because Bryant is leaving behind 50 receptions and six touchdowns from last season.

This offense has a lot of inexperienced and new pieces, so it will be interesting to see how well everything comes together. Roethlisberger isn’t bad as a fifth-round pick, but just realize that this offense still needs to gel.