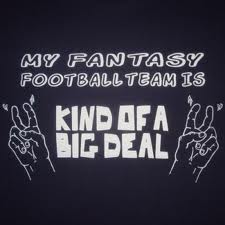 I would first like to thank everyone who has contributed an article, participated in my Fantasy Football Sit Start Challenge, and all the bloggers and website owners I have worked with over this fantasy football season. Even though we can get a bad reputation from time to time from a few bad eggs who make threats and demean athletes because they are unhappy with their lives, the fantasy football community is filled with great passionate people. The way this silly little game can bring people together is pretty remarkable, and the camaraderie and friendship you can form through is almost unparalleled.

I would also like to thank anyone who took the time to read any of my articles. You can pretty much find fantasy football advice anywhere, but if you took the time just to check out an article, I truly appreciate your readership. My goal with this site was to help fantasy owners, and while my advice can never be 100% right, I hope I was able to help you in some way shape or form. Having people message you that you helped their team make it to the playoffs is a truly rewarding experience. I would also like to add that if you have ever had the desire to start a blog or a fantasy football website, let 2014 be the year! I myself had several failed attempts at trying to start up some sort of fantasy football presence, but that was honestly due to pure laziness. The most important thing is finding consistency, and once you are able to achieve that, you are able to do anything. Don’t sit back and watch others when you have something valuable to contribute. Make your dreams a reality in 2014.

Without further ado, I will showcase my winning football strategies and the lineups I had in Week 17. I will provide an indepth analysis of these strategies and how they worked out in a future post, but for now here are what playoff fantasy teams look like.

*I originally had drafted Randall Cobb and James Jones on this team, but I had to alter the strategy due to injuries. You can find the article where I review the moves I made to make this a winning team more indepth here https://yourfantasyfootballcoach.com/2013/12/28/winning-with-the-waiver-wire/ *

Like Loading...
‹ Trent Richardson: Should We Have Drank The Fantasy Kool-Aid?
How Old Should Your Fantasy Football Wide Receiver Be? ›