The fantasy football season is vastly approaching, and if you haven’t done your draft yet, chances are it’s pretty close. Now is the best time to get some extra practice. Jack Delaney(Author of “How To Write About Fantasy Football: A No-Nonsense Guide) and myself participated in a 12-team standard scoring mock draft at Fantasy Football Calculator. I had the sixth pick, and here were my results: 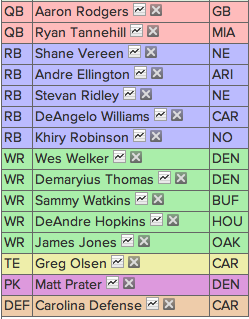 I wasn’t too thrilled with my results, but there are some silver linings. I selected Demaryius Thomas as my first-round pick, which may have been a bit of stretch in a Non-PPR format. I’m not a huge fan of Eddie Lacy, and Jimmy Graham might have been the safer choice, but I went with Thomas nonetheless. I find it hard to believe that Thomas and Peyton Manning can connect for 14 touchdowns again this year, but if they can some how improve on that total, Thomas could be the highest-scoring receiver in fantasy this season. I followed Thomas with Aaron Rodgers in the second round, who I think is going to have a nice bounce-back season after his injury last year. I selected Andre Ellington with my thrid-round pick, and if you aren’t on his bandwagon yet, I highly suggest you join. Bruce Arians, head coach for the Arizona Cardinals, has already stated that he wants to get Ellington 20+ touches a game, and Ellington has value as a great pass-catching back.

I added Thomas’ partner in crime Wes Welker as my WR2, and I also picked up the New England Patriots‘ rushing tandem of Shane Vereen and Stevan Ridley. While Welker may be the third option for Manning this season, he is still a premier slot receiver, and he will get looks in the red zone. Somebody has to flourish as the highest-scoring running back for the Patriots this season, and if Ridley can keep the ball from hitting the turf, then I think he could put up numbers like we saw from him early in his career. Vereen will always be a solid in PPR leagues, but I like him in standard leagues because of his speed and big-play ability. Vereen missed eight games last season, and still finished 12th in the NFL in receiving yards among all running backs. Scary to think what he could do in 16 games, right?

I chose players with upside to round out my team such as Sammy Watkins, DeAndre Hopkins, Khiry Robinson and James Jones. Even DeAngelo WIlliams could have a nice year for the Carolina Panthers, but that all depends on how evenly the touches are distributed. Kicker Matt Prater is one of the best in the league in my opinion, and he merits a 12th-13th pick in a 15-round league in my book, along with Stephen Gostkowski. I expect another good year out of the Panthers’ defense as well.

So, as the season gets closer, start mocking as much as possible. Pay attention to the preseason games that are left, and trust your gut. Happy drafting!