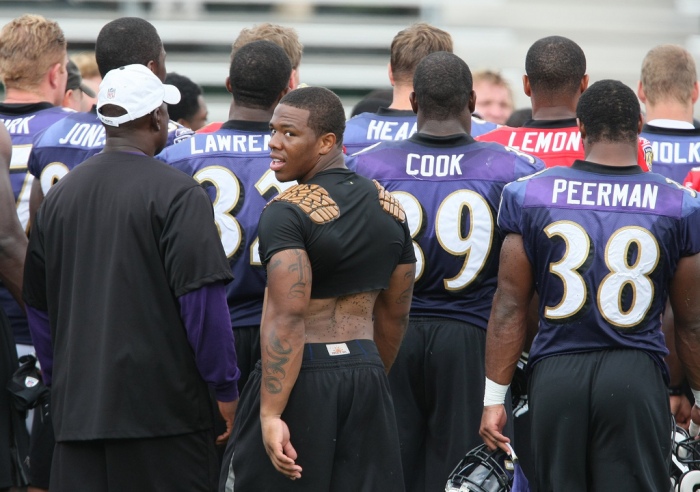 After TMZ Sports released a video of what transpired between Ray Rice and his wife Janay Palmer Rice, the 27-year old running back was cut by the Baltimore Ravens.

As Rice was already facing a two-game suspension before this happened, fantasy football fans were unable to see if the former Ravens’ starting back would find success under new offensive coordinator Gary Kubiak. Replacement Bernard Pierce was benched because of a fumble, and Justin Forsett took over the lead back duties. This leaves a very murky picture of what Rice and Pierce owners should do.

Benching Pierce after just six carries seems to be about something more than just that individual error. He has had a limited workload in the past two years, but he only averaged 2.9 yards per carry last season. Rice, however, only averaged 3.1 yards, so some of the struggles for the rushing attack last year appeared to be related to the offensive line. Unfortunately, we only have two seasons of limited action in which to judge Pierce.

Forsett has been a member of three different teams since entering the league in 2008, and he has yet to produce any relevant fantasy football season. He did look good against the Cincinnati Bengals’ defense, as he turned 11 carries into 70 rushing yards and scored a touchdown. The 28-year old back also caught five receptions for 14 yards. In previous seasons, Forsett has only been moderately involved in the passing attack, and he is not likely to continue to benefit owners in PPR formats.

Finally, we have rookie running back Lorenzo Taliaferro to add into the mix. Taliaferro compiled an impressive 29-total touchdowns with Coastal Carolina last year, but it was doubtful that the Ravens had planned to use the rookie so early. He may be able to jump Pierce on the depth chart, but other than waiting to see how many opportunities he will receiver, we have no way to gauge his fantasy success.

At this point, we have to wait for more information to unfold before a solid decision can be made in fantasy lineups. If you owned both Rice and Pierce and are desperate, Ahmad Bradshaw is only owned in 20% of ESPN standard scoring leagues and could see an increase in his workload.

If you are trying to find a running back with upside on the Ravens to add depth to your roster, you will need to wait to see how Week 2 plays out.

Unfortunately, fantasy football owners will have to play the waiting game before finding out if a Ravens’ running back can become a solid fantasy producer.