This week, veteran tight end Heath Miller announced that he was going to retire after 11 seasons in the NFL.

Miller has never been highly sought after in season long leagues, as he has never exceeded more than 816 receiving yards in a season. But he always has had relevant games in daily Fantasy Football when the matchup has been right. The 6-foot-5 tight end started Week 1 off with eight receptions for 84 receiving yards, and he had another big game in Week 8 with 10 receptions for 105 receiving yards. He did, however, only finish the year with two touchdown receptions.

But before we get to that, I wanted to provide a little background on the production of tight ends and wide receivers on the Steelers over the last several years.

Before the 2014 Fantasy Football season, I took a look at Markus Wheaton’s chances for success because he was being hyped up as a sleeper.

This was the production from receivers and tight ends for the Steelers from 2010-2013: 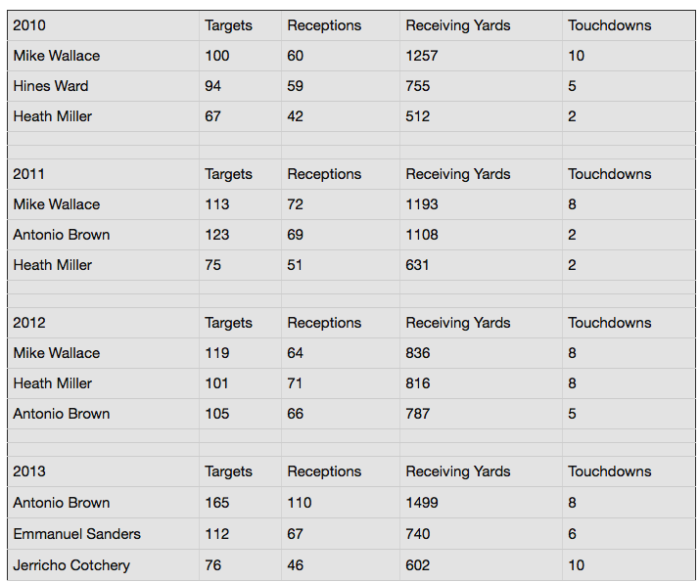 From that information, it didn’t appear that Wheaton was going to be a sleeper. That’s what I told Fantasy players, so hopefully you didn’t draft him. Wheaton finished the 2014 season with just 644 receiving yards and two touchdown receptions.

These are the 2014 season stat totals for the Steelers, according to ESPN:

And these are the 2015 season stat totals from ESPN as well:

In terms of trying to figure out if the Steelers can support two Fantasy relevant receivers, the information from the last two seasons is a little more difficult to analyze than in previous years.

Le’Veon Bell was almost a receiver in 2014, catching the second-most passes on the team and recording the second-most receiving yards. 2015 could have looked a lot different if Martavis Bryant and Bell were able to play a full season.

But, every season is always new and unique. You could see Antonio Brown and Bryant act as two relevant options next year, or maybe Brown and James will be worth starting each week.

I don’t think the probability of that is necessarily high, but you have to keep an open mind because there are no certainties or guarantees in Fantasy Football. No one can see into the future, and past performance isn’t indicative of future success.

So now that we have looked at the stats since 2010, let’s take a look at look at tight end Jesse James.

He played at Penn State from 2012-2014, and James broke a record for most career touchdown receptions by a tight end.

James was very impressive at the 2015 NFL Combine, setting records in the tight end group that year for the bench press, vertical jump, broad jump and 60-yard shuttle.

His draft profile highlights a set of perceived issues with why James couldn’t make it work at the NFL level, but I think his biggest issue right now is his age and lack of experience. He left college as a junior, and he will just turn 22 in June of this year.

I’m not going to knock him for leaving early and getting paid. But he still has a pretty big learning curve before he is a regular starter, which means it could take a long time before he is Fantasy relevant.

Veteran Matt Spaeth is still on the roster, but his primary role is as a blocker. He only caught two passes last season, and he has never caught more than 17 passes in his career with Pittsburgh.

There are a few interesting options available through free agency, and Dwayne Allen and Marcedes Lewis are two names that stick out. Allen and Lewis were mainly featured as blocking tight ends last year, but they have had bigger roles as receivers in previous seasons.

Even if it were just for a few seasons, it would make sense for the Steelers to add an experienced tight end while James is still developing.

James may see an increased role from his eight catches in 2015, but don’t expect him to be revenant in 2016 Fantasy Football leagues.