Will Jordan Matthews Start in Week 14?

He was able to practice on Dec. 7, so Jordan Matthews looks like he’ll start in Week 14.

And because this is the first week of the 2016 Fantasy Football playoffs for most leagues, Fantasy players have to decide if Matthews is worth starting quickly.

The 24-year old receiver has been solid in PPR leagues over his last five games. Since Week 8, he’s averaged 6.4 receptions per game. He’s also averaged 66.4 receiving yards during that time, which gives him an average of 12.8 Fantasy points per game.

But the one knock on his game has been touchdowns. He only has three on the season, and he’s tied for fourth with tight end Zach Ertz for red-zone targets. 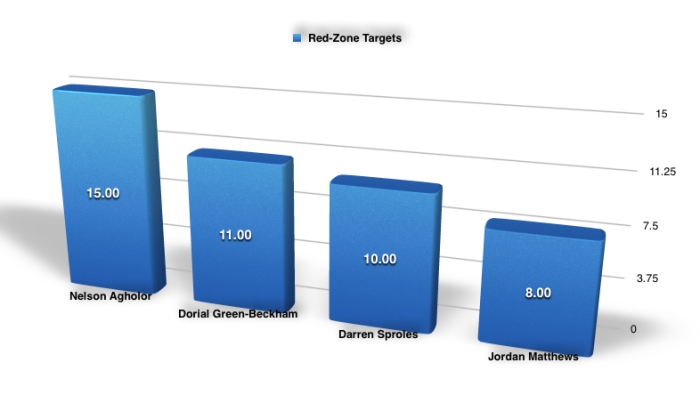 So, should you start him in Week 14? He’s on my Fantasy playoff team, and he’s going to be in my starting lineup unless I hear something to make me sit him.

On my bench, the only player I would consider sitting Matthews for is Isaiah Crowell. But if you have better options, take the time to analyze the matchups.

The last time Matthews played Washington, he posted a 3-75-0 stat line. Because we know his average has been 12.8 Fantasy points per game since Week 8, he’s a fairly safe starter at a flex spot if you’re looking for consistency.

If he is able to haul in a touchdown, he could have close to a 20-point performance. But if you need a lot of points, I would weigh your other options before automatically plugging him in.

If you need help deciding whether to start Jordan Matthews, hit me up on Twitter. If you want a more detailed response, email me.