Does Percy Harvin Have Any 2016 Fantasy Football Value?

Does Percy Harvin have any 2016 Fantasy Football value?

That’s a great question, but there isn’t an easy answer.

When a player hasn’t played an entire season, you have to worry about his conditioning. But according to The Buffalo News, Harvin has been training during his absence.

Harvin also said the time off has allowed him to heal.

That doesn’t mean, though, he’s ready to run out on the field and score you a bunch of Fantasy points the first time he plays. If you are hoping Harvin can make an immediate contribution to your Fantasy team, you’re going to be disappointed.

And even though Harvin played for the Buffalo Bills in 2015, he still has to get accustomed with the playbook once again.

It’s very likely he will barely be on the field in Week 9 against the Seattle Seahawks, and there’s a chance he doesn’t play at all.

The Bills have a bye in Week 10. So it makes more sense for Rex Ryan and the brass in Buffalo to try and get Harvin up to speed then, rather than throwing him in the mix against Seattle.

So the earliest Harvin may see the field is Week 11.

If it takes him two or three games to build a rapport with quarterback Tyrod Taylor, Harvin may not be Fantasy relevant until Week 13 or Week 14.

Of course, there’s no guarantee he will be relevant.

And for me personally, I wouldn’t feel very comfortable giving Harvin a starting spot in my lineup during some of the most crucial weeks in the 2016 Fantasy Football season.

But, if he can make an impact, you can’t overlook the importance of a player giving you three or four solid performances. I knew in the beginning of the season that DeAngelo Williams was only going have three games to make an impact, but I still targeted him for my teams because I knew he would score a lot of points and give my team an edge early in the season.

And Williams recorded the second-most Fantasy points from Weeks 1-3 in PPR leagues, according to FantasyPros.

So even though Harvin may not have an impact now, you have to be careful about dismissing him because you only may be able to use him in three or four games.

What we also have to look at is how Harvin now fits with what has been happening with the Buffalo Bills.

Sammy Watkins just got out of his walking boot, but he’s not eligible to play until Week 12. Robert Woods is still dealing with a foot injury, speedster Marquise Goodwin was ruled out in Week 8 because of a concussion, and pass-catching back LeSean McCoy has been dealing with a hamstring issue.

Seemingly, that should have opened the door for somebody to step up.

I thought that player would be Justin Hunter. Outside of tight end Charles Clay, who else was healthy?

But there weren’t any receivers worth starting on the Bills last week. 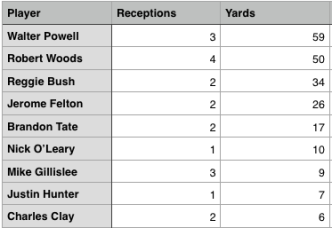 Seemingly, Harvin could step in and make a big impact.

There is a stat, though, that you need to know about. This stat could limit his production, even if he is healthy.

In three games, Taylor has failed to throw a touchdown pass.

And because Taylor is a dual-threat quarterback with three rushing touchdowns on the season, Fantasy players have always had to worry he would limit the upside of his receivers.

This limits the Fantasy value of Harvin.

Of course, it’s important to evaluate Harvin’s ability to make big plays and what he can contribute on his own accord.

Harvin has not been worth owning since 2011.

In that year, he posted a 87-967-6 stat line as a receiver, he rushed for 342 yards and scored two rushing touchdowns, and he returned a kickoff for a touchdown.

Since then, he’s never finished a season with more than 677 receiving yards.

But, injuries have kept him off the field.

So, does Harvin have any Fantasy Football value?

He might. But here’s what you have to keep in mind:

I personally haven’t added him to any of my teams, but I’m not against adding him. I would only suggest it, though, if you have enough room on your bench. Don’t cut a player who has a role in an offense and is scoring points, even if it is not a lot of points.

I have Marvin Jones on a lot of my teams. And if he got hurt, I would feel more comfortable plugging in someone like Dorial Green-Beckham right now over Harvin.

I’m not trying to dissuade anyone from owning Harvin. But it’s important to have realistic expectations of what he can do in 2016.

If you have any questions about Harvin or need help with your lineup, hit me up on Twitter. Or for a more detailed response, feel free to shoot me an email.